There was a time not so long ago when you would have got strange looks for thinking about venturing west of Central in Hong Kong. That area to the west of the Mid Levels on Hong Kong Island was generally considered the reserve of locals and adventurous expatriates.

While Central and Sheung Wan – with their boisterous bars and modern eateries – have long been considered de rigueur for the millennial crowd, few would have dared head west to Sai Ying Pun or Kennedy Town.

Local in character and populated by market stalls and motor mechanic shops, they were little more than sleepy residential outposts. Until now.

The extension of the MTR West Island Line to Sai Ying Pun and Kennedy Town in December 2014 opened up a new western frontier that has put these grassroots neighbourhoods firmly on the map.

The MTR – along with an undercover escalator that runs (very, very slowly) up the steep slopes of Centre Street in Sai Ying Pun – has proven a magnet for western-style restaurants, bars, boutiques and wealthy ex-pat residents, who have moved there in droves.

As you wander along the main arteries of both districts (First, Second, Third and High St in Sai Ying Pun and the waterfront and Catchick St at Kennedy Town), you can’t help but be amazed at the rapid transformation that is occurring in these old districts.

But you also can’t help but worry that this full-on gentrification is destroying the old-charm of some of Hong Kong’s oldest historical neighbourhoods, as wine merchants and oyster bars squeeze out the noodle shops, laundromats and street side butchers.

In Sai Ying Pun particularly, the new cafés, wine bars, restaurants and luxury apartments might be popular, but with each new opening another long-standing local business shuts down.

That’s because property prices are climbing fast, along with the cost of living.

Many fear the area will become another homogenous neighbourhood filled with chain stores and shoebox apartments.

Locals, understandably, argue that this change has not been for the better and many fear the area will become just another homogenous neighbourhood filled with chain stores and shoebox apartments aimed at expats.

With mixed emotions, most of us realise that this is the price of progress, as with any big city.

Sai Ying Pun is actually one of the oldest areas in Hong Kong, a place the British military called home when they first arrived in the 1800s.

Despite the rapid recent change, the district is still eclectic, crowded, convenient and has a real cultural buzz for first-time visitors.

On a recent visit, I stayed with friends in their high-rise apartment on Third Street. This really felt like the beating heart of Sai Ying Pun, with the MTR just a two-minute walk away and countless bars and restaurants – as well as the traditional fresh markets – a stone’s throw from the front door.

Positioned alongside the travelator at Centre and Second Sts, it stocks everything any expat or western visitors could want – including many Sainsbury’s-branded products.

But it’s after dark that Sai Ying Pun struts its new modern colours as restaurateurs serve up fare more fitting for the streets of London or Paris than old town Hong Kong.

British supermarket chain Tesco has reacted to the influx of expats to the area by opening a ‘hypermarket’ known as U Select. Located on Third Street, the store sells a range of Tesco branded products as well as dairy, fruit and vegetables and alcohol.

At the top of the hill on High Street, next to the crowds streaming up the Centre Street escalator, there are Italian restaurants and pizzerias, a faux-French bistro, Thai restaurants, Japanese and western fare as well as a wine shop.

Taylor Shellfish Farms at 80-86 High Street is also a fun place to sit with a crisp white wine while sampling freshly-shucked oysters from around the world.

I visited one afternoon in April with a friend, and because it wasn’t too busy the waiter gave us a free sample of oysters from Japan and the US.

It was a good move because they were so delicious my friend and I ordered a dozen each. (Having said that, I’m still convinced the best oysters in the world are from Australia.)

Chico Chica at 70 Third Street is a cosy, friendly Spanish tapas restaurant and wine bar. With its open kitchen, you feel part of the cacophony as the grill flares and each amazing dish makes its way to the pass.

I dined here with a group of friends and we ordered half a dozen tasting plates with the food immaculately presented. Most dishes are also part of their brunch menu and are great for a group.

The croquettes de jamon and the paella were amazing, so too the garlic prawns.

Just a warning though, this place is proving very popular so it’s worth booking ahead.

With quite possibly the coolest rest rooms in Hong Kong, The Winery Kitchen & Bar at 158A Connaught Road West, is somewhere you won’t want to miss.

Three levels filled with plants and comfy sofas make this the perfect place for a meal or a late-night drink.

If you’ve been to Bali or Singapore, you’ll know all about Potato Head. Well they’ve opened their third outlet at 100 Third Street in Sai Ying Pun.

Potato Head offers a variety of concepts within one establishment. It is a one-stop-shop for those who want to eat, shop, drink, enjoy music and chill.

Its restaurant Kaum serves delicious Indonesian cuisine that is influenced by unique Asian flavours from around the world.

I think perhaps my favourite dining experience was a hole-in-the-wall restaurant called Soo Viet, at 247 Des Voeux Rd West. I adore fresh Vietnamese flavours and this place is pretty hard to beat.

We ordered a range of delicious starters including fresh rice paper rolls, deep fried chicken wings, deep fried egg rolls, Vietnamese sausage (which was nothing like I expected – it was more sliced sandwich meat) and Vietnamese fried rice.

Once we’d polished that off we realised we’d left no room for Pho (noodle soup) or any of the other amazing dishes on the menu.

The restaurant (pictured) is relatively small and they do not take bookings. Just arrive and hope for the best, or else get takeaway.

Because it’s so popular, you sometimes might find yourself sharing the table with others – it’s all part of the experience. 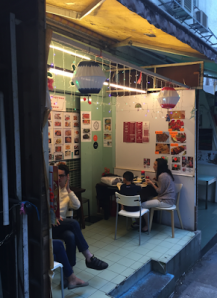 Hong Kong might also be the last place you’d expect to find a great Indian restaurant, but Indian Curry Express, at 25-35A Water St serves some of the most authentic and tasty dishes you’ll find.

Run by a couple from Delhi, Indian Curry Express is a real hidden gem on the fringe of Sai Ying Pun (pictured). It’s also easy to miss (we actually walked past it twice).

Look for it above Third Street, on the street level of the Rockson Mansion building.

Kennedy Town, which was named after the seventh governor of Hong Kong, Arthur Edward Kennedy, is a charming outpost on the western fringe of Hong Kong Island.

It’s also the last stop on the MTR’s Western Island Line, and the turnaround point for Hong Kong’s iconic ‘ding dings’, or streetcars.

As with Sai Ying Pun, Kennedy Town’s gentrification has brought with it a host of new restaurants, including a horde of British inspired gastropubs and “chippies”.

The waterfront spot Fish & Chick, at 25 New Praya, often attracts expats in their dozens in search of proper English-style fish and thick-cut chips.

As the name suggests, Shoreditch at 18 Catchick St, is another serving up British inspired cuisine.

It’s actually one of the better places to go in Hong Kong if you crave a traditional full English breakfast with thick sausages, crispy bacon and creamy scrambled eggs. They even serve black pudding.

And on weekends and public holidays, this is the place to come to for a traditional roast with all the trimmings.

Catch is a popular brunch spot that’s been operating at 93 Catchick St since 2014. It’s all about seafood – from oysters and mussels to prawns and perch.

Despite the influx of new eateries, there are still plenty of local tea shops and dai pai dongs holding their own in Kennedy Town. We’ve only scratched the surface, so it’s really worth taking your time and ambling around the streets to discover your own hidden gems.

Of course, there’s much more to see and do in Kennedy Town than simply eating.

The tranquil Lo Pan Temple at 15 Ching Lin Terrace is worth a visit. The colorful, well-kept temple dates back to 1884, and is dedicated to Lo Pan, the God of carpenters and contractors.

A popular spot for a selfie is the “Stone Wall Trees” at Forbes St (pictured below). The walls here have all but been swallowed by the roots of the century-old banyan trees.

The colonial government had a policy of using mostly Chinese banyan trees because their powerful roots strengthened retaining walls on slopes, helping to prevent landslides.

And if you’re up for a trek, the Sai Wan Swimming Shed, just below Victoria Road on the western edge of Kennedy Town, is a majestic hideaway that provides some incredible photo opportunities.