📹 New York: Take A Walk On The High Line

THE HIGH LINE MEANDERS THROUGH SOME OF NEW YORK’S HIPPEST NEIGHBOURHOODS, INCLUDING THE MEATPACKING DISTRICT AND CHELSEA.

It’s a city that boasts some of the world’s best-known landmarks, from the Empire State Building to Lady Liberty herself.

But an unlikely contender has become one of New York’s most popular attractions: a derelict rail route that hovers 30 feet above street level.

Meandering through 22 blocks of Manhattan’s West Side, the High Line is a carefully curated aerial greenway that starts at Gansevoort Street in the Meatpacking District and wanders through Chelsea to 34th Street.

The city originally ordered the abandoned elevated freight railway track to be torn down almost two decades ago, prompting a fight by locals who formed Friends of the High Line, a campaign group that saved the line from demolition and is now in charge of rebuilding it.

The elevated walkway – which celebrates its 10th anniversary in 2019 – cost about $US187 million to build.

But it appears to have been a good investment as the High Line now attracts around 7.8 million visitors annually, around half of them from the city.

It has also spawned copycat projects the world over. Sydney has its Goods Line running through Ultimo, for instance, while London is trying to get the Camden High Line up and running.

The original goods line was built in 1934 as part of New York’s West Side Improvement project.

Train tracks had originally been built at ground level along the middle of 10th Avenue, but this proved so dangerous that the stretch became known as “Death Avenue”. An elevated High Line was the solution.

But as the freight industry switched from rail to road, use of the High Line declined and stopped altogether in 1980.

As part of its restoration, hundreds of metres of old steel track have been restored to their original positions, with flowers poking through.

At two points, the route ducks right through huge gaps in private buildings where goods trains used to deliver directly to the upper floors of warehouses.

The thing about the High Line is that it throws up a strikingly different experience every day, and every season.

By day you’ll see people picnicking at 10th Avenue Square and Overlook, an area of wooden steps near 17th St, where people can peer out a viewing window (below).

At night, the cobblestoned streets of the Meatpacking District at 14th Street – where prostitutes and drug dealers once plied their trade – are pulsing as the fancy nightclubs come alive.

In the spring and summer, New Yorkers come for the peace and quiet – a true wilderness in the middle of a densely populated and chaotic city.

The wildflowers, the greenery and the outdoor art – as well as unique views of the Statue of Liberty, Empire State Building and the Chrysler Building – also attract tourists in their thousands.

A snow-flurried walk during the middle of winter can be just as rewarding, with the added bonus of having to compete with far fewer visitors.

Around Christmas you’ll see holly bush flush with bright red berries, as well as lace grass, witch hazel and Smokebush, as you stroll through canyons between buildings.

The High Line today runs through former industrial neighbourhoods that are now defined by apartments, restaurants, nightclubs, hotels, art, and fashion – areas that are constantly being transformed by the project.

The elevated green belt is likely to get even more crowded with the opening of the new 34th Street-Hudson Yards subway – the first subway station to open in New York since 1989.

An estimated 65,000 people are expected to pass through Hudson Yards each day.

If you’re planning a picnic on the High Line, check out this amazing emporium of food in the heart of the Meatpacking District.

Though be warned, it’s a little pricier than other food markets around town. 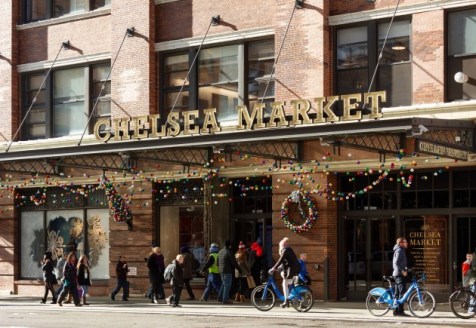 The site of the former National Biscuit Company (Nabisco) factory, where the Oreo cookie was created, is now home to this stunning food hall and market.

Inside, original factory floors and exposed brick halls set the scene as more than 38 vendors serve up a range of dining options that include sushi, lobster, cheeses, breads, coffee and cakes.

You can have noodles and curry at Chelsea Thai, an Aussie style meat pie at Tuck Shop, fresh pasta at Rana restaurant or lobster rolls, sushi and seafood at the Lobster Place.

Chelsea Market is the perfect to place to grab breakfast or a spot of lunch before venturing onto the High Line.

On the western side of Chelsea Market, inside big red doors, you’ll also find Artists & Fleas selling bespoke, artisanal products – including from vintage jackets and sunglasses, to old records and organic made lotions.

In a neighbourhood that was once home to sex dungeons and street walkers, the 18-floor Standard Hotel has earned a reputation for hanky panky.

With non-reflective floor-to-ceiling windows overlooking the High Line, numerous guests have reportedly been seen getting up to no good over the years.

Just west of 11th Avenue, a sunken stretch of the park has been turned into a unique play area for kids, known as the Pershing Square Beams.

There are numerous play structures, like periscopes and a gopher hole where kids can pop up from beneath the deck into a bed of plantings.

As anyone who’s ever visited the High Line will know, there’s a huge variety of public art along the aerial greenway, curated by Friends of the High Line.

The plinth is the focal point of a cul-de-sac-like section of the High Line known as the Spur, at 30th Street and 10th Avenue, that was completed in 2018.

Unfortunately, the High Line has been so successful at transforming west Chelsea that many art galleries have seen steep increases in rent, with some forced out of the neighbourhood.

So take the time to get down on street level to support local galleries as well.

It’s a 10 minute walk from the High Line to Chelsea Piers (take the stairs at W 20th street and head towards 11th Avenue).

The Chelsea Piers complex stretches for six blocks along the Hudson River and hosts a range of sports and activities including rock climbing, batting cages, golf nets, gymnastics and even ice-skating and bowling.

This is also the place to come for some of the best views of the Hudson River.

An unusual 15 storey staircase/art installation known as Vessel is planned for the Far West Side Hudson Yards development.

The bronzed steel and concrete pieces that make up this mammoth 46 metre-high structure are being manufactured in Italy and will be assembled on-site.

So far, 10 of the 80 sections have been delivered with the rest to arrive throughout 2018.

Vessel is expected to open in March 2019.

The controversial art structure will include 154 interconnected flights of stairs, 2,500 individual steps, and 80 landings. Vessel has already been described as the “stairway to nowhere”.

If you’re near the High Line and Hudson Park and Boulevard at West 34th Street, keep an eye on the Vessel as it’s being built.

It’s quite a sight watching it take shape as our image above shows. Once it’s completed, it will be open for everyone to enjoy, although it’s almost certain to divide opinion.

The High Line begins south of West 14th Street and stretches north to 30th. Here, the main section of the elevated walkway swings left and wraps around the west end of Hudson Yards in a looping path and then slopes down to meet West 34th Street.