Sydney: Mardi Gras is 40, and fabulous 🌈

More than 40,000 international visitors are expected to converge on Sydney over the next month as the Harbour City kicks up its heels for the 40th annual Gay & Lesbian Mardi Gras.

The Mardi Gras Festival officially begins on Friday February 16 when the iconic rainbow flag is hoisted above Sydney Town Hall at George Street.

This year’s program – “40 Years of Evolution” – includes performances, parties, exhibitions, films and other events over 16 days, culminating with the iconic parade up Oxford Street from 7.45pm on Saturday March 3.

One of the first major events on the Mardi Gras calendar is Fair Day, a family-friendly (and dog-friendly) picnic day on Sunday February 18 that often attracts close to 70,000 people at Victoria Park, Camperdown, near Broadway.

The Mardi Gras Film Festival is also a jewel in Mardi Gras’ crown, featuring a raft of local premieres including the highly-anticipated Beach Rats and Signature Move.

The Art Gallery of New South Wales will throw its regular Art After Hours program over to the Mardi Gras on Wednesday February 28, with a glittering array of queer performances and live music to accompany its night tour.

The event overlaps with the exhibition ‘Robert Mapplethorpe: The Perfect Medium’, which provides a rare glimpse into New York’s gay scene in the 1960s, ‘70s and ‘80s through the lens of one of history’s greatest photographers.

Other Mardi Gras highlights include the Indigenous-led Koori Gras and a family fun day at Luna Park, under the Sydney Harbour Bridge.

While tens of thousands will be celebrating the colour and the costumes on March 3, it’s important to remember that Sydney’s Gay & Lesbian Mardi Gras wasn’t always a sequin-studded affair.

Back in the 1970s, homosexuality was illegal. People lost their jobs, homes, friends and family for identifying as gay.

The first march along Oxford Street on June 24, 1978, erupted in violence and injuries as police took on gay activists. The Sydney Morning Herald even published the names, addresses and occupations of the 53 people arrested for taking part in the “unlawful march”, although many cases were later thrown out of court.

(If you are in Australia, be sure to tune in to the ABC on February 25 at 8.30pm for the telemovie ‘Riot’, which documents the momentous first Mardi Gras.)

Despite its ugly beginnings, Mardi Gras has grown to become the biggest and most flamboyant Pride celebration in the southern hemisphere.

It has also helped bring legislative change, including the decriminalisation of homosexuality in NSW in 1984 and the legalisation of gay marriage in 2017.

“From the first march in 1978 to being one of the world’s great LGBTIQ festivals, the history of Mardi Gras is the history of the community’s long path to equality,” she said.

“We are proud to be a long-term supporter of Mardi Gras and of the great welcome Sydney gives to visitors from all over the world.”

Biggest and the Best

This year Mardi Gras has a dual cause for celebration: not only does this year’s parade mark 40 years, it also coincides with the legalisation of gay marriage in Australia.

As a result, this year’s celebration promises to be the biggest, brashest and most colourful yet.

Mardi Gras organisers received a record 12,000 applications from groups looking to take part in the parade, with 200 floats registered for the event.

Several floats will pay tribute to the original campaigners, known as the ’78ers, who marched in protest in the first parade in 1978.

Keep an eye out this year for the Sydney Swans float with the AFL club becoming the first professional sports brand to march in the Mardi Gras Parade.

The National Rugby League (NRL) has participated for the past four years with the Pride In League float, involving  mainly former players as Ambassadors. But no NRL club has ever marched under its own colours.

Of course, it just wouldn’t be Mardi Gras without a party – and it’s not confined to the clubs and bars around Oxford St.

Bars at The Rocks, Surry Hills, Paddington and even Bondi Beach will be getting in the spirit, while the traditional Mardi Gras Party will be better than ever as Cher takes top billing.

Those lucky enough to snaffle one of the $250 tickets will dance until dawn to a string of chart-topping hits including Believe, Strong Enough and I Got You Babe.

The traditional laneway recovery party will kick off at The Beresford and Flinders Hotel from 2pm Sunday, wrapping up at 1am the next morning.

Mardi Gras now ranks as one of the most significant events on Sydney’s cultural calendar – second only to New Year’s Eve in terms of the number of visitors it attracts.

And make no mistake; the pink dollar is highly lucrative. Visitors who come to Sydney for Mardi Gras, on average, spend more than other tourists.

Last year alone they bolstered the state’s coffers by around $40 million, according to the NSW Government.

Not only do visitors spend big on hotels, airfares, bars, restaurants and sightseeing tours, but they also keep the cash registers turning over in department stores and fashion outlets on Oxford Street and the main CBD shopping hubs of Pitt St and George St.

Once the Mardi Gras is over, they also spend big exploring other parts of the country, from Melbourne in the south to Cairns, the Great Barrier Reef, Noosa and Brisbane in the north.

More than 5,000 visitors typically head to Australia’s tropical north for sunshine and rainbows in ‘Recovery Week’.

Turtle Cove Beach Resort in Cairns is one of the most popular destinations for sun-seekers post Mardi Gras. The Wickham Hotel at Fortitude Valley, Brisbane, also hosts a massive block part on the first Sunday after Mardi Gras, known as Big Gay Day.

The best vantage points for the parade are obviously along the 1.7 km parade route, which starts at Whitlam Square at Liverpool and College Streets and runs up Oxford Street to Taylor Square. The parade then turns right down Flinders Street and heads to Moore Park.

With more than 200,000 revellers expected to turn out for the parade, it’s best to plan ahead and preferably get there early. Many streets will be blocked off, so leave the car at home and take public transport or walk to the area. Visit www.transportnsw.info to plan your trip.

If you haven’t already secured seats in the VIP viewing area (they’re now sold out), or you haven’t been invited to one of the many parties in high-rise apartments along the parade route, then here are your next best options:

On the first Saturday in March, Oxford Street is usually heaving with people. If you can get a front row spot close to the action, then it’s potentially one of the best areas to enjoy the night.

Some restaurants (like Belloccio) are continuing to trade on the night, but they’ll be having a lock-in. It’s one option to consider if you want to sit back with a champagne or vino and avoid the crush.

This is one of the more popular areas to watch the parade, so take your milk crate and get there early to grab your spot. A dedicated drop-off and pick-up zone on Forbes Street is close by, making it easily accessible.

Near the end of the parade route, this area is often less crowded and is more suitable for families with children.

Have a Happy and Safe Mardi Gras.

You Might Have Seen Our Work In These Publications: 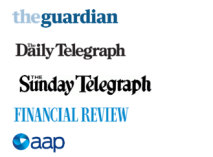