It’s just after 7am at Eisenberg’s Sandwich Shop, a no-frills luncheonette that sits in the shadow of a New York landmark, the Flatiron Building.

A unique mix of customers stream in on this frosty February morning, some ordering breakfast sandwiches to go at the cash register, while others perch themselves on one of the red leather swivel stools, devouring cheese-drenched patty melts and sky-high Reuben sandwiches.

As working-class lunch counters go, Eisenberg’s is one of my favourites.

It’s a 1929 original that has stubbornly stood the test of time while others of its ilk, like Cup & Saucer at the foot of the Manhattan Bridge near Chinatown, have shut down due to sharp and sudden rent hikes.

Some people come for the food, others for the conversation.

For me it’s the old-school atmosphere: the long counters with their worn cushioned stools, the aproned waitstaff swinging a coffee pot in one hand and clearing tables with the other. Now that’s classic New York.

Despite changing tastes and healthier food trends, these relics of the past continue to serve affordable, filling, no-frills comfort food to the masses.

So, next time you’re in Manhattan, grab a counter stool, order a patty melt and pay homage to the Big Apple’s iconic lunch counters.

Here are a few of my favourite counter restaurants that offer a decent bite at any time of the day. 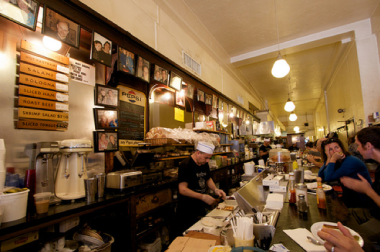 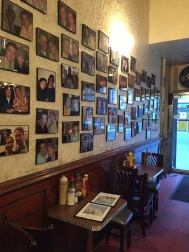 The Eisenberg family opened this luncheonette at 174 Fifth Ave, opposite Madison Square Park, in 1929.  Although it has passed through several hands since they retired, the restaurant and its menu have remained virtually unchanged.

The first thing you’ll notice here is that the walls are crammed with cheesy snaps of celebrity diners, including Leonardo DiCaprio, Jodie Foster, Katie Couric and even Happy Day’s Ron Howard.

You’ll also notice that this place attracts a lot of locals whose name is remembered and whose order rarely changes. I’m told there are people who’ve eaten at the counter for decades. If I had the chance, I’d quite happily be one of them.

Make no mistake, the true Eisenberg’s experience happens at the counter, so skip the tables out the back and grab one of the 25 counter seats where you can watch Victor and the other kitchen staff in action.

This Flatiron gem, just 500m from the Eataly food emporium and the popular Shake Shack, is highly-regarded for its throwback menu. It serves reliable classics like bacon and eggs, cheese-drenched Reubens, tuna melts, matzoh ball soup and frothy egg creams. I’m also a fan of the bottomless coffee.

If there’s one thing I’d pass on though it’s the stodgy pile of potato hash they seem to serve with every hot breakfast. It’s not pleasant and it’s just not needed.

This is a New York diner frozen in the 1940s, with a long counter lined with spinning stools and an L-shaped row of cozy booths. It’s also New York’s oldest family-owned counter restaurant, now run by John Philis, the grandson of the original owner.

You’ll find all the classic comfort foods on the menu here, including omelettes, tuna melts, pancakes and hamburgers.

In keeping with tradition, your lemonade and orange juice are always freshly squeezed to order and the syrup for your Coca-Cola will come from a pump, just the way it was done in the 1940s.

Located just three blocks from the Metropolitan Museum of Art (MoMA), the Lexington Candy Shop is worth a pitstop if you’re sightseeing and need a good place for lunch.

This is a tiny space with just nine stools at the counter, but it’s a reliable hole-in-the-wall just off Flatiron.

Take a seat at the long Formica counter with a bird’s eye view of the grill and watch as the cook bangs out popular menu items from pancakes and omelettes to burgers and sandwiches. The coffee is also served in old-school white porcelain cups.

This place is popular because it does all-day breakfasts.

Okay there are more booths than counter seats, but it would be a sin not to include this classic all-day diner just footsteps from Macy’s, Madison Square Garden and Penn Station.

Andrew’s Coffee Shop, in the heart of New York City, is likeable and unpretentious, with straight-forward food done well and served fast.

It’s hard to beat their eggs and omelette’s first thing in the morning, while they also do damn good pancakes and coffee. The servers are always eager to please and always ready to refill your coffee.

On a recent visit in the middle of winter I ordered a warming bowl of oatmeal and it was huge and filling. I probably should have asked for a much smaller serve.

With an unapologetically simple breakfast menu that includes stiff white toast, no-fuss eggs and bottomless coffee, you can be sure the tables are rarely empty at this West Village dive.

Aside from the food, this cash-only luncheonette is also very vintage, with photographs of famous fans plastered all over the walls, including TV host Andy Cohen alongside actor Ethan Hawke, Molly Shannon and the late James Gandolfini.

The Bonbonniere moniker is a bit of a mystery. Folklore has it that the restaurant is 88 years old and was originally owned by a French woman who dubbed it La Bonbonniere.

From all day breakfasts with sausage and eggs to arguably one of the most underrated cheeseburgers in town, this is a classic American diner serving no-frills but very satisfying food.

With its worn formica countertops and retro swivel stools, you’ll feel like you’ve stepped back in time when you enter this nondescript diner two blocks from Union Square.

Check out the breakfast specials before 11am including eggs, pancakes and french toast. But given Joe Junior’s is regarded for its very good burger, it would be a shame not to try it.