Few people realise it, but Philadelphia is the street art capital of the world.

Thanks to a city-funded Mural Arts Program, Philly has more street art than any other US city, with more than 3,600 murals adorning buildings across the city and its surrounds.

The murals first started appearing in 1984 when the city was trying to combat graffiti. It soon morphed into a city-wide project to beautify the city with the help of  disadvantaged youth and prisoners.

Visitors don’t have to venture too far to marvel at the world’s biggest outdoor art gallery, with the MuralMile walking tour following a circuit through downtown Philly. It’s actually a 2.5 mile walk that visits 17 commissioned murals in the city centre.

For the more adventurous, there are also many more works to be found out in the suburbs. Popular photo blogger Conrad Benner,  who runs the Streets Dept blog, also organises walking tours of Philadelphia’s expanding street art scene. 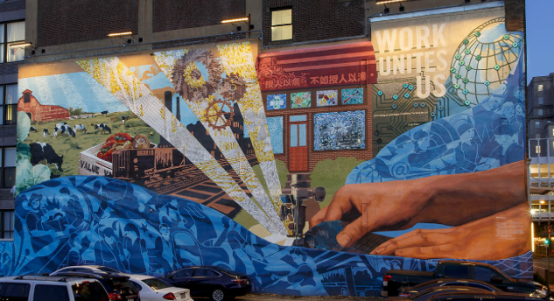 Located in a parking lot at 707 Chestnut St, this 10,000-sq-foot mural explores the work of Abraham Lincoln and Frederick Douglass to end slavery. It was produced by five public schools and dozens of individuals, who hand laid more than one million small glass titles on the mural’s right side. The left side was produced by Eric Okdeh and inmates at Grateford prison.

“Pride and Progress”, located at 1315 Spruce Street, depicts a gay civil rights march held in 1966, and the pride celebration that followed. Artist Ann Northrup painted her own sister and her sisters partner on the far right of the mural.

“Philadelphia Muses” is a 6,000 square foot mural at 13th and Locust St by master muralist Meg Saligman. It explores the diversity of modern artistic disciplines.

Our City, Our Team 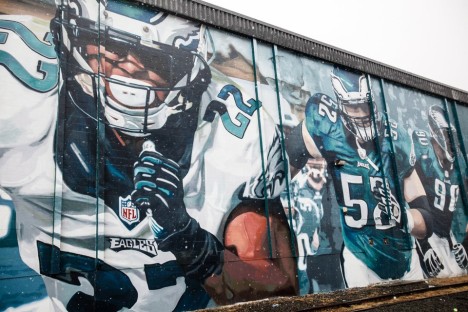 “Our City, Our Team” is a collaboration between the Philadelphia Eagles and Mural Arts Philadelphia. At 27,000 square feet, it’s the second largest mural in the city and the fifth largest in the country. It is found at the intersection of South Darien Street and Pattison Avenue.

Numerous murals of Malcolm X adorn the walls of Philadelphia buildings. This 2005 work, “Malcolm X” by Ernel Martinez, is found in the Strawberry Mansion neighbourhood, in north Philadelphia. These days it’s difficult to see between the trees.

Another mural painted by Meg Saligman a few months after 9/11, this iconic mural greets commuters entering the city each day. It’s meant to look slightly sad, as if the flag is slipping off the building.

If you were a cat, wouldn’t you want to hang around a neighborhood called Fishtown?  This mural by VURT Creative is found at 1140 Frankford Avenue, between Delaware and Girard Ave.

Elton John donates $1 million to Australia's bushfire relief efforts. ❤️❤️❤️ 🐨 🦘 #Respect #Sydney #AustraliaBushfires #EltonJohn #Tourism #Travel #Australia #OpenForBusiness
The Aussie #passport - already the world's most expensive - just got a little bit more costly. A 10-year passport jumps today by $5 to $298. Search our blog for more. . #Travel #Australia #PriceHikes
You haven’t really visited #Sydney until you’ve eaten a pie with peas (or just sauce) from Harry’s Cafe de Wheels at #Woolloomooloo. See our latest blog to learn more about this heritage-listed Aussie icon.. #Travel #FoodieTravel #StreetFood #HarrysCafeDeWheels
#Sydney #SydneyHarbour ☀️ ⛵️
A new local favourite - the family-run Fang Dumpling House at Cremorne, on #Sydney's Lower North Shore. 😋 🥢 🥟 #Dumplings #FoodieTravel #Travel #Food #PrawnAndChickenSuiMai #PorkDumplings #VegetableDumplings #SpringRolls
For the first time in more than half a century, trams are set to become a familiar sight on the streets of Sydney. Trams are officially due to start running on December 7. See our latest #travelblog for more. 🚃. . #Travel #Sydney #LightRail #Transport #Tourism #BackToTheFuture
Some of the best #sushi in #Sydney, hands down. #SushiSamurai at Neutral Bay. 🍣🥢🍤 😋 #FoodieTravel #SushiRolls #Tempura #Miso
Tours of #SanFrancisco's Salesforce Tower have been sold out six months in advance. But new dates will be released early next year. See our latest blog for the best views of the Bay Area. . #Travel #ObservationDecks #California
In our latest #travelblog we go behind the scenes at the prestigious Norwood Club, one of New York's new breed of private clubs. Norwood's 1,100+ members have an artistic bent and include writers, artists, designers and actors. . #Travel #NYC #Manhattan #PrivateClubs #Luxury #LuxuryTravel #NorwoodClub
A permanent climbing ban takes effect at Uluru in Central Australia this Saturday - 34 years to the day that the land was handed back to indigenous owners. Search our blog for more. #Uluru #AyersRock #NorthernTerritory #Travel #TravelTuesday #AliceSprings
#Deepavali (also known as “Diwali” or the “Festival of Lights”) is a celebration that marks the triumph of good over evil. It’s also one of the best times to visit #Singapore’s #LittleIndia. #Travel #CulturalFestival #HinduFestival
Tram travel is free in Melbourne’s CBD and Docklands. But if you travel outside the CBD you’ll need to buy a #MykieTravelCard * * #Travel #Trams #Melbourne #Victoria #Australia
The Ritz-Carlton brand returns to Australia next month - almost two decades after #Sydney’s Ritz-Carlton Double Bay closed. The 5-star Ritz-Carlton Perth opens on November 15. See our latest blog for an inside look. * * #Hotels #LuxuryTravel #Travel
It’s like summer in Sydney at 32c. Perfect weather to ride the #Cremorne to #CircularQuay ferry. ☀️. #Travel #Sydney #SydneyHarbour #OperaHouse #HarbourBridge #Australia
Bees and lavender. It can only mean Spring in #Sydney 🐝🐝🐝 #Travel #Flowers #Australia #Bees
Shah Rizzal’s “Layers” is a whimsical reproduction of the iconic shophouses you’ll find scattered throughout #Singapore’s #LittleIndia. It’s one of many murals commissioned for the annual ARTWALK Little India. Another is “A Ride Through Race Course Road”. See our latest #travel blog for more.
#Singapore’s shophouses are as iconic as the city’s gleaming glass skyscrapers. Check out our latest blog for more. #Shophouse #Travel #Chinatown #EmeraldHill #LittleIndia #JooChiat
A bit of Saturday plane spotting near Sydney Airport. ✈️ 🌬 #Travel #Airports #Aircraft @qantas @cathaypacific @cebupacificair