New York: The Oculus – All White By Me 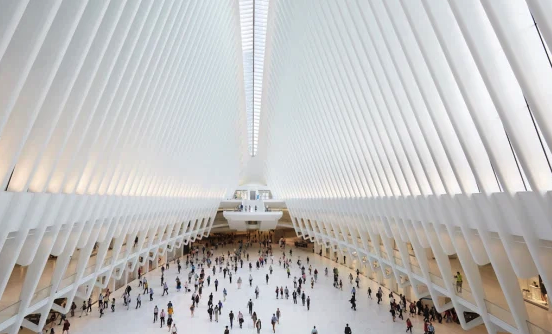 It has been ridiculed almost as much as it has been raved about. But no matter what you think about the $4 billion Oculus in New York City, it seems visitors are literally floored by the all-white, glass-and-steel structure.

On any given day you’ll find an army of visitors sprawled out on the sleek, white marble floor of the main hall (below) with their cameras aimed skyward, almost oblivious to the 50,000 or so commuters who pass through daily. 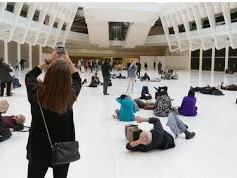 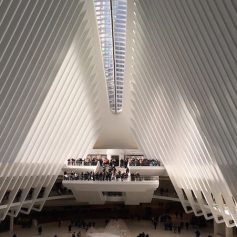 Designed by Santiago Calatrava, the Oculus opened on March 3, 2016, to praise and controversy.

It’s the centrepiece of the Westfield World Trade Center in Lower Manhattan, with 800,000 square feet of stores spread over two levels below ground level. It also connects commuters to 11 underground subway lines.

The light-filled concourse features a sculptural 160-foot atrium of white ribs and glass panels (224 panes of glass in all), with a central spine of retractable skylights that open in a gesture of remembrance every September 11.

A rubber seal that runs along the spine of the retractable skyline is believed to have ripped during its opening and closing on the anniversary of the 9/11 attacks in 2018, and it has leaked ever since.

Located at the corner of Church and Cortlandt Streets in Lower Manhattan, three minutes walk from 9/11 Tribute Museum, the Oculus is impossible to miss.

You can see the elliptical structure from blocks away, with its steel ribs and panes of glass forming a pair of 350-foot wings. Some critics suggest it looks more like a beached whale carcass.

Running the length of each face of the elliptical structure is seating: 56 individual nooks.

One row of marble benches, more than 300 feet long, looks north onto the Oculus Plaza. The other faces south toward 3 World Trade Center.

Since the Oculus opened in 2016, this workaday pocket of Lower Manhattan below Chamber Street – home to stockbrokers and fund managers on the edge of Wall Street – has slowly emerged as one of New York’s most vibrant neighbourhoods.

For years, Lower Manhattan emptied out each evening when the Wall Street crowd went home. Now, thanks in part to the Oculus and a booming restaurant scene, the oldest part of New York is drawing a younger crowd.

Over the past five years or so, downtown has emerged as one of the most significant  areas of the city for dining.

The popular Italian-style market Eataly Downtown is in the connecting Westfield World Trade Center. It’s a follow-up to Mario Batali’s original Eataly at Flatiron, on the ground floor of the old Toy Building.

The Oculus is also connected by an underground passage to the Fulton Center, which has a mezzanine-level food court. One of my favourites there is Wasabi Sushi & Bento, although there are many fine sushi restaurants scattered throughout the financial district.

Across West Street, hugging the Hudson River, is Brookfield Place, where you’ll find luxury boutiques like Hermès and Burberry, the French marketplace Le District (below) and the foodie favourites Umami Burger and Black Seed bagels.

One of the hottest tickets downtown is Frenchette, which along with Le District, signals the revival of Gallic fare in an Italian-crazed city.

While you’re down this end of town, drop in to The Dead Rabbit, one of the best bars in the city, inspired by the 19th-century Irish-immigrant gangs of New York. It was named the World’s Best Bar in 2016 by Drinks International magazine.

If shopping is more your thing, you’ll find the original, enormous Century 21, with designer discounts galore across from the Oculus on Cortlandt Street. 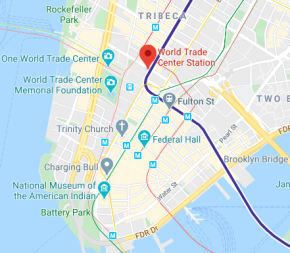 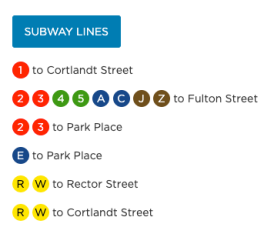 The Oculus: Corner of Church and Cortlandt Streets, Lower Manhattan.