The Bombed Temples of My Son

Bernard O’Riordan discovered major efforts are underway to save the ancient temples, monuments and religious relics at Vietnam’s My Son Sanctuary, which was carpet-bombed during the war.

Described by French historians as ‘the Valley of the Kings’, My Son or holy land is a mind-blowing collection of abandoned and partially ruined Hindu temples built between the 4th and the 14th century A.D. by the kings of Champa.

This ancient site – reminiscent of Cambodia’s Ankgor Wat although on a much smaller scale – sits in a lush jungle basin surrounded by a ring of mountains, including Cat’s Tooth or Hon Quap Mountain.

It’s a popular day-trip for tourists staying in Hoi An, about an hour or 50km away near the coast, as well as Da Nang, which is roughly 90 minutes north-east.

Touted as one of the longest inhabited archaeological/religious sites in Indochina, My Son was recognised as a national site in 1979 by Vietnam’s Culture Ministry and a World Heritage site by Unesco in 1999. 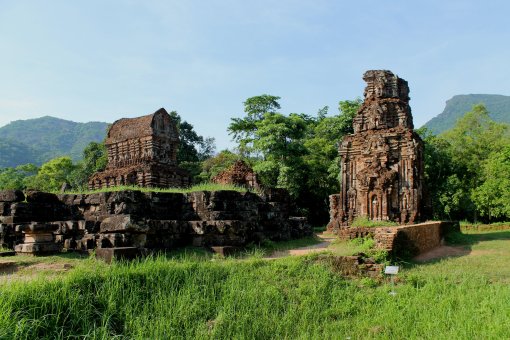 This 2km-wide valley was a religious centre and royal burial ground for the Champa kingdom, which inhabited most of south and central Vietnam.

It is made up of eight groups of 71 monuments built throughout the 7th-13th centuries.

The temples were built into groups that basically followed the same model. Each group was comprised of a main sanctuary (Kalan), surrounded by towers and auxiliary monuments.

Constructed from locally-fired red bricks and sandstone, some temples have bent roofs, claimed by archaeologists to reflect the crooked peak of Cat’s Tooth Mountain in the distance.

Cham temples do not have windows, so they are almost pitch black inside. Windows are found only in the towers, although there are only about 20 towers remaining.

The site fell into disrepair following the fall of the Champa and was rediscovered by French soldiers in 1885.

More recently, restoration began in 1937 but the site was further destroyed by bombing during the Vietnam war, when My Son was used as a base for the Vietcong.

A large majority of its architecture was destroyed by US carpet bombing during a single week of the war, and you can still see the huge bomb craters (below) as you wander the historic area.

After the unification of Vietnam in 1975, conservation work resumed in earnest, with both national and international teams working to restore and preserve the special site.

Although the entire area has been cleared of land mines, visitors are still warned not to stray from the defined paths and established areas when exploring the site. 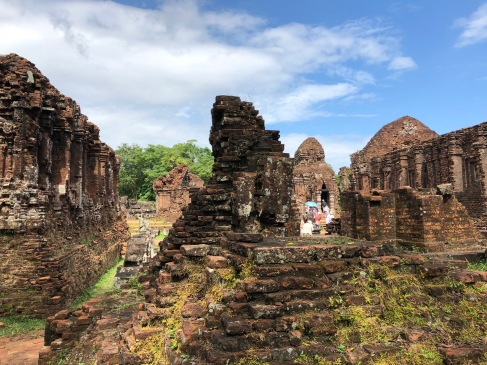 Between 2010 and 2016, most known remnants of bombs and chemical toxins in the area as consequences of the war were removed. A second phase to restore highly-collapsible relics is now underway.

However, the biggest risk to these fragile structures is the region’s severe weather conditions, including flooding and high humidity.

To preserve these structures from flooding and deterioration, conservation and restoration efforts have focused on widening the river and reducing overgrown vegetation.

On average, 300,000 people visit the ancient Hindu temples at My Son Sanctuary each year, mostly foreigners (70 per cent) on organised tours.

To encourage more people to visit and stay overnight in the region, the management board of My Son now wants to set up top-class lodging, dining and entertainment services close by.

When you arrive at My Son Sanctuary, be sure to check out the dance and music performances held in the main hall near the on-site shop.

The show runs for about 30 minutes and you’ll see performers in colourful costumes (pictured) accompanied by traditional instruments on stage.

There’s also a museum further down the mountain at the main entrance.