From hot dogs to home runs, nothing screams New York more than a day at the ballpark. Here’s everything you need to know about a day (or night) at Yankee Stadium in the Bronx.

When I told a friend I was visiting in New York that I was off to Yankee Stadium to see the home side take on Detroit, I was a little miffed by her response.

For an Aussie more attuned to cricket and rugby league than American baseball, there’s no doubt it takes a fair bit of will power to sit through nine agonising innings on a Sunday afternoon.

And while I’m still not sure what a squeeze play is, or how you would go about executing one (don’t get me started on flares, dingers or RBIs), the truth is you don’t need to be an expert to appreciate the sense of occasion that comes with visiting Yankee Stadium.

Truth be told, the game is merely a backdrop for a broader social event.

This is New York, after all, and visiting the home of one of sport’s most-recognised brands – the 27-time World Series Champions, the New York Yankees – is not an everyday experience.

The 2020 Major League Baseball (MLB) season was supposed to start on Thursday, March 26. It has now been postponed indefinitely due to the global coronavirus pandemic.

You can stay up to date with the Yankees’ 2020 schedule here.

As we reacquaint ourselves with the familiar smell of hot dogs, freshly cut grass and warm spring air, here’s everything you need to know for a day at Yankee Stadium. 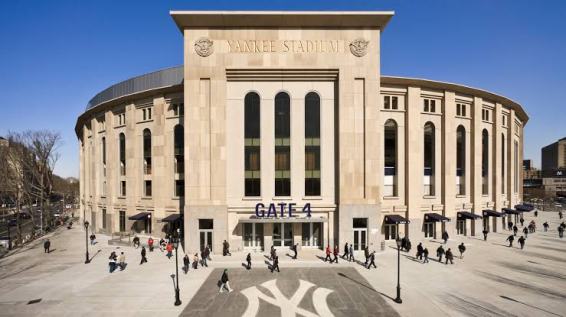 ⚾️ Yankee Stadium – What to see and what to do

Located a short subway ride from Midtown Manhattan at 161st Street and River Avenue, Yankee Stadium is arguably the most notable landmark in the Bronx.

Known affectionately as the Cathedral of Baseball and the Bronx Zoo, Yankee Stadium opened in 2009 to replace the House That Ruth Built – the original Yankee Stadium less than a mile away.

Yankee Stadium 2.0 actually looks and feels more like the Roman Colosseum than a ballpark, due mainly to its imposing exterior with towering arched windows set in limestone, granite and cast stone.

Even on game day, it can be a rather sterile experience, focused more on celebrating baseball’s greatest franchise and its storied past rather than entertaining the fans.

At Babe Ruth Plaza, between Gates 4 and 6 on the south side of the Stadium, you can celebrate the greatest Yankee of them as you wait to enter the Colosseum. 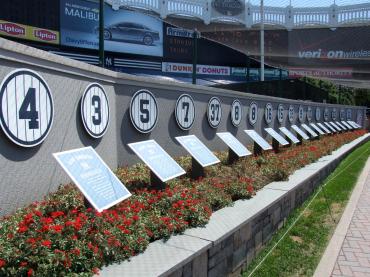 Inside, there’s more Yankees history to discover at Monument Park, an open-air museum located centre field underneath the scoreboard.

It includes plaques, statues and retired numbers and celebrates the best players in the history of the franchise. Monument Park closes 45 minutes before game time though, so turn up early if you plan to visit.

If you’ve dreamed of getting up close and personal with Babe Ruth‘s bat, Mickey Mantle‘s glove or Derek Jeter‘s jersey, or even trying on a World Series ring, head for the New York Yankees Museum, on the main level of the stadium near Gate 6.

You’ll find Thurman Munson‘s original locker there, as well as statues of Yogi Berra and Don Larsen. There’s also a “Ball Wall” –  a wall featuring hundreds of autographed balls from Yankee players. The Museum is open on non-game days as part of Yankee Stadium tours.

Take time to look up at the roof, which features a replica of the gently curving frieze that was an iconic part of the previous and much-loved Yankee Stadium.

⚾️ Game Day – Take the subway to the stadium door

The beauty of taking the 4 train from midtown Manhattan to the Bronx on game day is that you’ll always know when to get off: just follow the thousands of fans covered head to toe in their pin-striped paraphernalia.

Even out-of-towners like us managed to look like seasoned professionals when we visited in 2016, walking confidently with the masses as they exited the subway at 161st St. The trip from midtown to the Bronx takes around 25 minutes.

After stopping at the official merchandise stall to buy an obligatory Yankees cap, we made our way to the Yankee Stadium Ticket Office, near Gate 4, to collect our pre-booked tickets. I’d highly recommend buying tickets online and collecting on the day – it was seamless.

Then we joined a snaking line of people being screened for entry, a  process that took less than 10 minutes.

Metal detectors are located at all stadium gates and bags are searched for banned items like bottles, cans, selfie sticks, video cameras and weapons. Check out the list of banned items here.

For baseball fanatics who want the best view of the game, the seats on the second level – especially near the infield – are hard to beat. I’m told these aren’t just the best seats at Yankee Stadium, but perhaps the best seats at any major league ballpark in the US.

However, we’ve gone in the other direction – right up to the rafters on the top deck, as you can see in the video clip above. Yes, these are “the cheap seats”, but I reckon they also had the best atmosphere.

Just be sure you don’t get vertigo like my travelling companion, who struggled with being nine storeys high.

While he spent more time wandering the stadium concourse than he did in his seat, I spent most of the afternoon eves dropping and being entertained by two Yankees fanatics seated behind me.

I think I learned more about the game of baseball from them that day than I had from any book or YouTube clip.

⚾️ Food and Drinks – So much more than peanuts and crackerjack

Ball parks often bring out weird and wonderful food concoctions, whether it be nachos on a stick or a pretzel hot dog.

The closest thing to weird at Yankee Stadium, maybe it was more wonderful, was the Family Slider Deal – five sliders in a bucket with fries for $20. And you get to keep the bucket. I settled for a hot dog and a beer in an iconic Yankees cup (pictured).

No matter what you crave, the plates are loaded at Yankee Stadium with 12 new food items unveiled in the Yankees 2019 Dining Guide (stay tuned for the 2020 Yankees Food Guide).

There are also some old favourites that reflect local tastes, and it doesn’t get much more New York than one of Lobel’s iconic steak sandwiches.

For five generations, Lobel’s has been one of Manhattan’s premier butcher shops and it has been carving premium meats every game day at Yankee Stadium for the past 11 seasons. 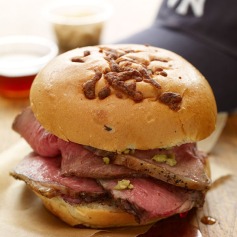 The steak sandwich actually looks more like a burger, but who’s complaining?

Other popular menu items include strips of prime steak on a bed of fries covered in gravy; a classic prime beef burger with gherkins; a meatloaf burger and a hickory molasses-glazed grilled chicken sandwich.

Throughout the stadium, fans can find vegan, vegetarian and gluten-free fare. 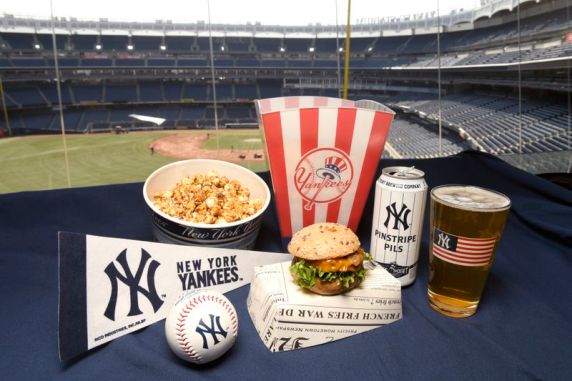 The only new vendor in 2019 is Buffalo Wild Wings (section 107), which is serving traditional and boneless wings with a variety of sauces and dry rubs.

Considering it has been dubbed “a mall with a ball park in the middle”, it’s fitting that there’s also a 7,000-square-foot Hard Rock Cafe with a full bar, restaurant and patio seating. You’ll find it near Gate 6 at 161st Street.

⚾️ Explore the Bronx – Check out nearby museums, parks and zoos

Bronx Museum of the Arts 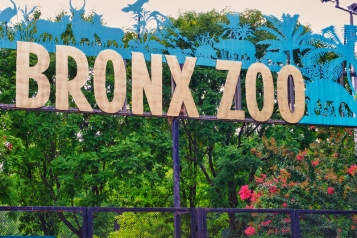 If you’re looking to fill time before the game, or walking out half way through (it does happen), there’s plenty of great things to do in the neighbourhood.

The Grand Concourse is about three blocks from Yankee Stadium, but it’s worth the walk. Modelled after the Champs-lyses in Paris, it’s home to the Bronx Museum of the Arts, which displays plenty of pin-striped memorabilia as well as work by Bronx-based artists and those of African, Asian or Latino ancestry.

You’ll find one of Joe DiMaggio’s bats here and one of Elston Howard’s Golden Gloves.

Afterwards, check out the flourishing West African neighbourhoods that are found in the streets behind the museum.

Stop for a drink or a bite to eat at Yankee Tavern, a bar decked out with wall-to-wall Yankee paraphernalia, that’s been a neighbourhood favourite since 1923.

A bit further afield you’ll find the Bronx Zoo, while the borough’s green spaces include the New York Botanical Garden, a 19th century garden overlooking the Hudson River called Wave Hill and Van Cortlandt Park and Pelham Bay Park, where any other day you might bird-watch, play golf or ride horses.