To the casual observer, it looks like chaos. But the clockwork manner with which hundreds of thousands of suit-clad commuters cross paths at New York’s Grand Central Terminal each day is truly mesmerising.

On an average working day, more than 750,000 people are funnelled through the tunnels and walkways onto the sprawling 22,000-square-foot marble concourse. To put that in perspective, that’s almost the entire population of San Francisco under one roof.

That number swells dramatically during the festive season from November to December, when more than 1 million people swarm through the terminal on their way to somewhere else.

A legacy of the Vanderbilt family – whose adopted symbol, the acorn, can be found throughout the terminal – Grand Central is the largest railway hub in the world.

It has 44 platforms serving 63 tracks, with a train arriving every 58 seconds via the subway and on the Metro-North line, the state-operated line that serves the suburbs north of the city.

A tourist trap that even the locals love.

By the end of 2022, the MTA’s long-awaited East Side Access project – a new rail line being built deep in the bedrock 15 stories below – will see another 150,000 commuters arriving each day.

It’s easy to see why Grand Central is a tourist trap that even the locals love. Opened on February 2, 1913, it has grown to become one of Manhattan’s busiest landmarks – second only to Times Square – with more than 26 million people passing through each year.

With its glittering chandeliers, cathedral windows, celestial ceiling and magnificent Beaux-Arts aura – as well as 50 shops, 20 eateries, four fine dining restaurants, cocktail bars and a fresh food market – it has repeatedly been named the most beautiful station in the world.

It was declared a National Historic Landmark in 1976, giving it official protection from developers who one day might want to demolish it.

If you’re visiting Grand Central for the first time, make a point of contemplating its famous features on your own self-guided audio tour, taking in the tall windows, grand staircases, chandeliers, and four-faced clock at the central information booth.

There’s also an official guided tour that takes you behind the scenes and lifts the lid on some of Grand Central’s best-kept secrets.

Here are some of the architectural wonders and historical secrets that are hidden in plain sight.

The cavernous Main Concourse is the heart and soul of Grand Central. At 84 metres long, 37 metres wide and 38 metres high, it’s an impressive space filled with movement, light and architectural detail. The area is flooded with daylight from the giant windows overlooking the main concourse, giving it a sense of energy, while the high ceilings make it feel far less crowded than it actually is. This is where you’ll find the tickets booths, the four-faced Tiffany clock and the large American flag, hung there just a few days after the 9/11 attacks on the World Trade Centre in 2001.

The famous four-faced, 13-foot-wide Tiffany glass and opal clock is a symbol of the city and has been a popular meeting place for New Yorkers for more than a century. Many people don’t realise that the four white clock faces are actually made of opal and have been valued by Sotheby’s and Christies at between $10 million and $20 million. Atop the clock is a brass acorn – the Vanderbilt family symbol. The family motto was “Great oaks from little acorns grow”, and so you’ll find oak leaf and acorn motifs throughout the terminal. 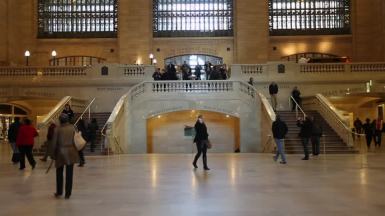 Grand Central Terminal’s original architectural plans called for two grand staircases in the Beaux-arts style, modelled after the grand staircase at the Paris opera house. But  when the terminal building opened on February 2, 1913, only a single staircase was to be found, on the west side. It wasn’t until the 1990s that a duplicate marble staircase was added on the east side.

One of the terminal’s most striking features is the domed gold-and-cerulean-blue ceiling painted with astronomical signs and studded with fiber-optic stars in the main concourse. It shows the Mediterranean sky during the October to March zodiac and features 2,500 stars, giving the terminal’s interior a beauty and openness that you’ll be hard-pressed to find at any other commuter hub. In 1913 an amateur astronomer who passing through noticed that the zodiac was actually backwards – it’s a mirror image of how the sky actually looks. There’s even a love letter from the artist embedded in the ceiling. 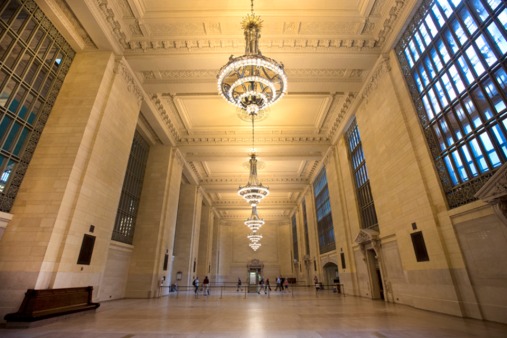 Vanderbilt Hall, named after the shipping and railroad magnate that built the previous Grand Central Station, was once the main waiting room for passengers. It now hosts  various events throughout the year, including the Grand Central Holiday Fair – the longest-running indoor Christmas market in New York. It’s also the place where CBS opened its first television studios in 1939. Walter Cronkite anchored his first evening news bulletin from there in 1962.

Walk between the Main Concourse and Vanderbilt Hall and you’ll find the Whispering Gallery, an inconspicuous and unmarked space near the Oyster Bar & Restaurant. The 2,000 square foot rotunda is famous for its acoustics, and is one of the most intriguing areas within the terminal. When two people stand facing diagonal arches and whisper, they can hear each other as if they were standing next to each other. That’s because the parabolical curve helps sound travel up and across the rotunda without escaping. 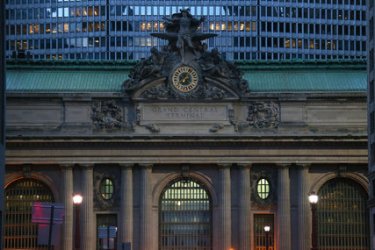 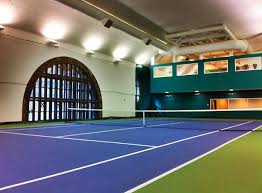 Not many people realise there’s a tennis courts in Grand Central Terminal, as well as a smaller practice court. The courts were originally located on the third floor – a space that housed an art gallery in the 1950s, a TV studio for CBS and even a 250-seat movie theatre. In 1984, Donald Trump took over the space to create a private Tennis Club for celebrities and other wealthy tennis enthusiasts. Following renovations, The Vanderbilt Tennis Club moved to the fourth floor in 2011. The courts are open to the public, but they don’t come cheap, costing $200 – $280 an hour depending on the day and time.

Hercules on the Facade

Take time to look up and marvel at Jules-Félix Coutan‘s incredible sculptures on the outer facade overlooking 42nd Street. Here you’ll see Hercules standing tall, surrounded by Mercury (the god trade and travel) and Minerva (the god of craft and wisdom) –  representing the foundations of transportation and commerce. The 13-foot-diameter clock that sits at Hercules’ feet is the largest piece of Tiffany stained glass in the world. There’s also a hidden door at the Roman numeral VI.

Grand Central’s cavernous concourse and mysterious nooks have made it a favourite backdrop for film makers for the best part of a century. From super villain Lex Luthor’s subterranean lair in Superman (1978) to Cary Grant’s efforts to elude spies in Alfred Hitchcock’s 1959 classic North by Northwest (above), the terminal building has long had star appeal on the silver screen. Dozens of films have been shot on Track 34 – one of the few platforms in the terminal without columns. Look for it in the 1953 film The Band Wagon, where Fred Astaire dances his way up the platform after getting off a train.

If you have the New York Pass, the audio tour or Grand Central Terminal is included in your ticket.