Singapore: State of Confusion Over Cabs 🚕

Taxis in Singapore are cheap, clean and air-conditioned. But as Bernard O’Riordan discovered, the fare structure is notoriously complex and confusing.

Singaporeans have a love-hate relationship with their taxis, and it’s not hard to see why.

I don’t know of any other city in the world where the taxi system is as complex and confusing as it is in the Lion City.

Jump in the wrong one and you’ll pay a whole lot more for the privilege of sitting on only slightly nicer leather.

Then there’s the laundry list of charges that are added to a basic fare.

When I visited last year, there were seven taxi companies with 10 different flag down fares, three different types of metered fares, about 10 different surcharges and eight phone booking charges.

Despite efforts by the Singapore Government to simplify the mess, the state of confusion over taxi fares remains a sore point for locals and tourists alike.

To emphasise the point, the Straits Times newspaper put together this graphic several years ago highlighting the bewildering number of options and surcharges that exist.

While the prices may have changed over the past few years, there’s no doubt confusion still reigns.

The problem started in 1998 when taxi fares were deregulated and companies were allowed to set their own fares and be more responsive to market conditions.

So to achieve uniformity of fares, the government would have to step in and oversee the sector once more, and that’s unlikely to happen.

The good news is various app-based ride-hailing services – like Grab, FastGo and soon Gojek – are bringing competition and choice to the market.

Once you’ve settled on your preferred ride, spend some time understanding what your trip is likely to cost you. To prevent any nasty surprises later, scrutinise the type of taxi you’re getting in first.

A standard taxi from the airport to the centre of Singapore in a Comfort Toyota Crown will cost between S$20 and S$30 during off peak hours or S$30 to S$35 during peak hours.

A premium taxi like a SMRT will cost slightly more at between S$30 and S$40 during off peak hours or S$40 to S$50 during peak hours.

Peak hours are 6am to 9.30am Monday to Friday and 6pm to midnight Monday to Sunday.

As well as the standard fare, any taxi trip starting at Changi Airport includes an airport surcharge. From 5pm to midnight Monday to Friday the surcharge is S$5. From midnight to 6am every day, the surcharge is 50 per cent of the final metered fare.

There’s also a S$3 surcharge for pickups from popular tourist hotspots like Gardens By The Bay and Resort World Sentosa, where you’ll find Universal Studios.

At Marina Bay Sands, there’s a S$3 charge to be picked up on Sundays and public holidays between 6am and 5pm.

What You Need To Know

There are seven taxi companies offering different levels of service, and each has different flagfall rates and booking fees.

Comfort, Singapore’s largest taxi company, has around 16,600 cabs on the road while premium provider SMRT Taxis, with around 3,000 cars, and Premier Taxis (SilverCab and PlatinumCab) are other options.

The typical flagfall for a standard taxi is between S$3.20 and S$3.90 and includes the first kilometre of your journey. After that, the meter ticks over at 22c for every 400 metres travelled.

That’s still much cheaper than in many western countries, including Australia, the UK and the US.

There’s also a number of app-based hailing services like Grab, FastGo and the soon-to-launch Gojek, although it can be difficult for short-term visitors to use these services. Here’s where to find your Grab car if you do use them after arriving at Changi Airport.

Standard taxis: Look for a blue, yellow or red taxi to be sure. They are easily distinguished by the mid-range Toyota, Hyundai or Kia models used and the colour of each cab company. These operators are Comfort (blue), Citycab (yellow), Transcab (red), Silvercab (silver) and Prime (pink). The first kilometre is usually between S$3.20 and S$3.70 with 22c for every 400m after that.

Premium taxis, maxi cabs and MPVs: These are usually SUVs or Mercedes E220s and are typically silver or white. SMRT Taxis even has some that look like London cabs, only they’re white. The initial flagfall and first kilometre is S$4.50, with 30c per 400m after that. You’ll also be charged an additional $2 per head if there are more than four adult passengers. Beware there’s a $10 booking fee with PlatinumCab – and as much as $18 if booked more than half an hour in advance of the trip.

Ride-Hailing Services: Private-hire car and taxi booking services like Grab, Gojek and FastGo are duelling for dominance in Singapore’s crowded taxi arena, promising cheaper fares and less hassle. Uber doesn’t exist here: it sold its South-East Asia business to Grab last year in exchange for a stake in the company.

You Must Use a Taxi Stand or Rank: Within the CBD, you must use a taxi stand. Drivers aren’t allowed to stop anywhere along the road for a passenger who hails them down – they actually face severe fines for doing so. By law, passengers can only get into or out of a cab within the greater city centre area at signposted taxi stands. You’ll find them near most shopping centres and major office building.

Cash is King: Visa card is no longer accepted in Singapore taxis after a dispute several years ago between cab companies and the card giant. And every other card attracts a whopping 10 per cent surcharge. However, if you pay with MasterCard in an SMRT Taxi before December 2019 there’ll be no administration fees. In most other instances it’s best to pay with cash. Singapore’s notoriously straight-forward taxi drivers will deter you as best they can from using credit cards. Quite simply, they don’t like waiting for payments to clear in order for them to be paid. 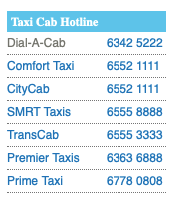 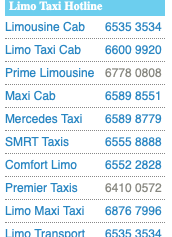