Vietnam: How Coronavirus Shut Down Tourism

Visiting popular landmarks and staying in luxury digs when there are few people around would normally be a traveller’s delight. But watching the rapid shutdown of tourism in Vietnam was a sobering experience.

The coronavirus outbreak has trashed tourism the world over. I witnessed the catastrophic impact it is having first hand after travelling through Vietnam last week.

At Ho Tram Beach, I watched my resort empty out and popular landmarks progressively shut down as countries started to close their borders and holidaymakers rushed home.

After just a few days in Vietnam, a country with one of the world’s lowest coronavirus infection rates, I got used to dealing with wary taxi drivers, anxious wait staff and cautious sales assistants.

The country, which stopped issuing visas for all foreign visitors on March 18, is expected to lose billions of dollars due to the coronavirus outbreak and the rapid and steep collapse of international travel.

Vietnam’s tourism department says it is bracing for $US3 billion to $US4 billion in direct damage in just three months.

Here’s what it was like when I visited Ho Chi Minh City and the coastal towns of Ho Tram and Vung Tau from March 12 to March 20.

The first indication that this was not going to be any ordinary holiday hit me when I arrived to a sea of chaos at Tân Sơn Nhất International Airport in Ho Chi Minh City on March 12.

This was a week before the world’s major airlines announced shutdowns and countries started to close their borders to foreign visitors.

Arriving passengers must undergo mandatory screening by quarantine officers before being granted access to the country. This was more about ensuring they knew our planned movements rather than performing actual health checks.

There were separate cameras that tested your body temperature as you passed through.

The arrivals hall was chaos with just two quarantine officers processing hundreds of arrivals. Each passenger took at least five minutes to process, so the wait for those at the end of the line was lengthy.

Luckily, I completed my declaration online before arriving and zipped through a lot faster than many others.

The steps of the Municipal Theatre of Ho Chi Minh City, also known as Saigon Opera House, are usually heaving with selfie-taking tourists.

When I visited the elegant colonial building at Lam Son Square in District 1, I had the stairs to myself.

The crowds were also missing at the historic Central Post Office, just metres from the Saigon Notre Dame Cathedral. 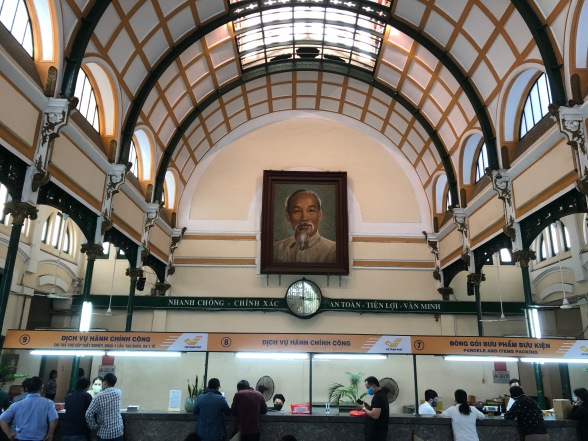 With Chinese visitors banned from entering Vietnam, and restrictions on visitors from several European countries including the UK, it was noticeably quiet inside as well.

Saigon Notre Dame Cathedral, built in the late 1880s by French colonists, is one of the few remaining strongholds of Catholicism in the largely Buddhist Vietnam.

Although the cathedral was closed for repairs and not accessible to the public, the usual busloads of visitors taking happy snaps were obvious with their absence.

With around 3,000 stalls, and normally crowded with tourists from every part of the globe, the number of visitors has more than halved in recent weeks, according to some stallholders I spoke to.

The trendy Bến Thành Street Food Market, popular for its wall murals and a rabbit warren of vendors dishing up South East Asian dishes, first opened in 2015 and was specifically designed to appeal to tourists.

This footage was taken early afternoon on Saturday March 14, a time when the market should be heaving with hungry travellers. There was not a tourist in sight.

Visiting the time capsule that is Reunification Palace (also known as Independence Palace) has never been easier. There were no queues at the main gate on Nam Ku Khoi Nghia, and no tour groups blocking your view as you roamed the stately rooms inside.

The palace was the base of  Vietnamese General Ngo Dinh Diem until his death in 1963. It booked its place in history on April 30, 1975, when a tank belonging to the North Vietnamese Army crashed through its main gate, ending the Vietnam War. 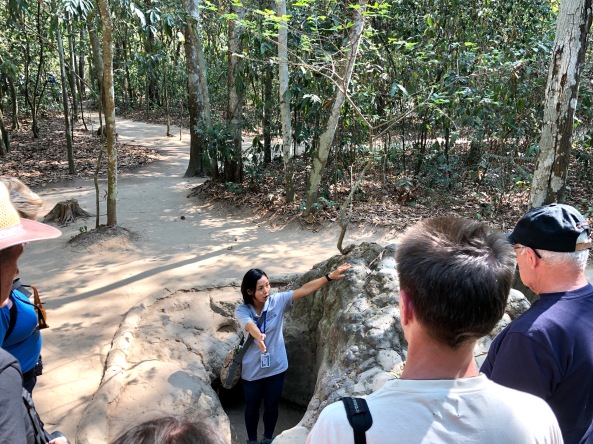 The popular Cu Chi Tunnels, about 90-minutes north of Ho Chi Minh City, must surely be one of the hardest hit by the travel meltdown.

Our guide Hang (pictured) said the historic underground tunnels and bunkers – used by the Viet Cong during the Vietnam War – usually welcomed around 3,000 tourists a day. When I visited on March 13, fewer than 700 visitors passed through.

With no new tourist visas being issued to foreigners, and flights to Vietnam grinding to a halt, the site was expected to temporarily close. 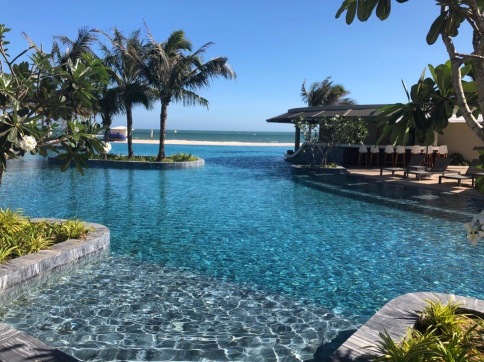 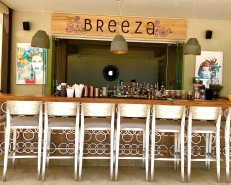 The gym shut down 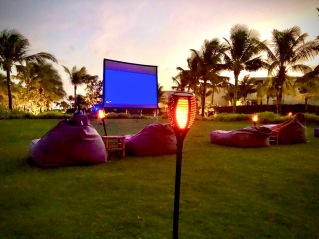 Occupancy levels were at rock bottom for most of our stay, with roughly two rooms on each of the 17 floors filled in the main tower (there are 152 rooms in total). Just a handful of the 61 stand-alone villas were occupied.

There were no Chinese or British holiday makers, just a handful of Australian, Vietnamese and German guests.

It’s a similar story at major hotel chains across Vietnam, which are already reporting their bookings have plummeted by up to 80 per cent compared to last year.

On March 17, mid-way through my week-long stay at Melia, the German visitors left en masse and many Aussies followed soon after, following warnings by the Australian Government for citizens to return home.

Within hours, the ‘closed’ signs went up at the pool bar, the gym and the YHI day spa. My partner and I had managed a full body therapeutic massage just a day before, which in retrospect was probably not the best idea given current circumstances.

The true measure of how empty or full a resort is comes when it’s time to eat. Most days we were the only guests lunching at the Breeza Beach Club, or dining nightly at the Asian street food restaurant SaSa.

The Vietnamese restaurant Muoi was closed for most of our visit, opening only for dinner on Friday and Saturday nights. 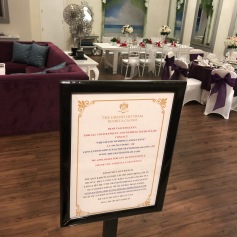 At the mammoth Grand Ho Tram Resort & Casino nearby – Vietnam’s answer to Macau and Las Vegas – you truly could hear a pin drop. It was so empty it was like a scene from an apocalypse movie.

Because gambling is prohibited for Vietnamese citizens, The Grand Ho Tram relies heavily on the hordes of big-spending Chinese tourists and gamblers who cross the border to try their luck.

Chinese tourists made up about 30 per cent of all visitors to Vietnam last year, and account for a whopping 70-80 per cent of The Grand’s annual bookings.

Needless to say, without them, the cavernous hotel and casino was lifeless – aside from the loud music being pumped through the place.

When I visited on March 16, the casino was empty but operating, while many restaurants and bars were closed.

The deserted Wedding & Events Centre, which is usually booked out months in advance by Chinese brides, was a forlorn sight. 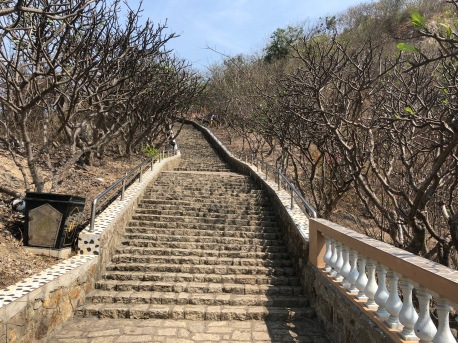 Climbing the 847 stairs to the giant Christ the King Statue at Vung Tau is usually a highlight for any visitor to Vietnam. But there were only a dozen or so people when I visited on March 17.

The tourist shops at the entrance were deserted, the stairs were free of the usual hordes and those who did visit were required to wear a face mask or risk being turned away.

It’s rare to have a major tourist attraction all to yourself, but that’s what happens when fear takes hold.

In Vietnam, maintaining a safe social distance from other people was relatively easy as there were few people around most of the time. For many, the biggest challenge was getting home.

We cut short our trip by a day when Qantas announced it was suspending international flights and the Australian Government warned Australian citizens to return home or risk being stranded overseas.

Early on Friday morning, the departure board at Ho Chi Minh City Airport was a sea of red (above) as dozens of flights were cancelled and people scrambled to get flights home.

Thankfully, we made it back to Sydney without any delays or mishaps.

Now in mandatory self-isolation for 14-days, we’ve got plenty of time to reflect on what a memorable trip it was. Sadly, it’s for all the wrong reasons.

Rarely has a government’s public health message been so popular.

A music video released by Vietnam’s Health Ministry to prevent the spread of coronavirus proved so catchy it went viral with more than five million views.

The government is also connecting through social media apps like Instagram to educate citizens and travellers about preventing the spread of coronavirus.

Users get a daily message (right) from the government when they log on.

The #Skillion is a must-see landmark for any visitor to #Terrigal, north of Sydney. The sedimentary rock formation dates back to the Middle Triassic period. Check out our latest blog for more.
#Sydney's new rainbow footpath at Prince Alfred Park honours the place and time when 30,000 people gathered to hear the results of Australia’s marriage equality postal vote. 🌈 ❤️
Happy Lunar New Year. Check out our latest blog to see how #Sydney is welcoming the Year of the Ox. .
Sea Cliff Bridge, south of Sydney, is reminiscent of France's Grande Corniche. You've probably seen it featured in a car ad. Check out our latest blog for more.
The #blowhole at #Kiama, south of Sydney, is one of the world's largest.
The Echo Point Lookout at Katoomba in the Blue Mountains has recently been upgraded with sky-high views of the Three Sisters. Check out our first blog of the year for more.
@bridgeclimb going strong. 🇦🇺 ☀️
A very different New Year's Eve without international visitors around the harbour foreshore. Hopefully 2021 will see a return to some kind of normality. #Travel #Tourism #Sydney #Australia 💥 🥂
The southern hemisphere's first accredited Dark Sky Park at #Coonabarabran is fuelling a boom in astronomy-inspired travel. Discover more in our latest #travelblog
Australia's $5 billion summer cruise season is in jeopardy with foreign flagged vessels still banned in Australian waters. See this week's blog for the latest.
Sydney's iconic #LunaPark has turned 85, but it's been a bumpy ride. There have been numerous closures and costly court stoushes with nearby residents over noise. Then there was the deadly ghost train fire of 1979 which claimed seven lives. Happy birthday @lunaparksydney
#Sydney's iconic Coca-Cola sign, at the corner of Darlinghurst Rd and William St, is a landmark that's as familiar as the #SydneyOperaHouse or the #HarbourBridge. First installed in 1976, it runs on more than 2km of LED lights and is considered the largest neon billboard in the southern hemisphere.
Sydney's world-famous #NewYearsEve fireworks have been given the green light, but they'll be scaled down due to COVID-19. Check out our latest blog for full details.
It's 20 years this week since the #SydneyOlympics. Check out our latest blog for all the nostalgia of the "best Games ever." #MySydney2000 #Sydney #Australia #OlympicGames #Travel
Beautiful spring day in #HydePark #Sydney 🌼☀️🇦🇺