HCMC: Bunker Down In The Cu Chi Tunnels

The Cu Chi Tunnels, north-west of Ho Chi Minh City, are a 250 km-long network of underground tunnels where the Viet Cong bunkered down during the Vietnam War.

“Look around! Look around!”, says our guide Hang with an enthusiastic smile, gesturing for us to find the entrance to the underground tunnel.

It doesn’t take long before she bends down and lifts a small wooden hatch on the jungle floor that’s been camouflaged with leaves and twigs, revealing a dark, narrow underground trench.

This elaborate hole in the ground is part of the Cu Chi Tunnel network, a labyrinth of subterranean tunnels that run for around 250 kilometres with sections that are up to nine metres below ground level.

Communist forces began digging the network of tunnels under the jungle terrain of South Vietnam in the late 1940s to escape French enslavement.

They were later used by the Viet Cong as a safe haven from the merciless bombing by American forces during the Vietnam War from 1964 to 1973.

At least 45,000 Vietnamese men and women are said to have died defending the tunnels over the course of the Vietnam War.

With narrow passageways, kitchens, a hospital, planning rooms, weapon areas, firing posts and even booby traps, the tunnels were like an underground village. 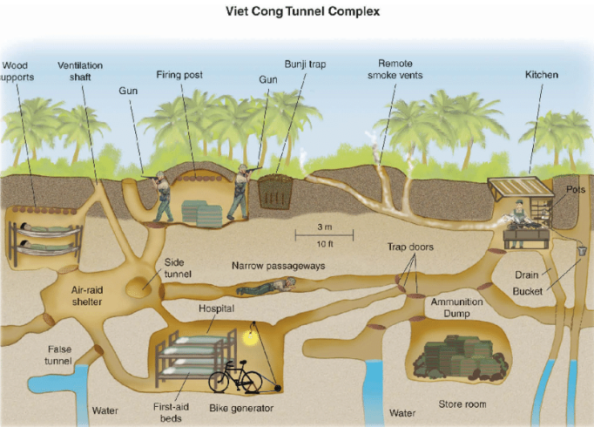 We’re at Ben Dinh, about 30 km north-west of Ho Chi Minh City, where a large part of the tunnel network has been reconstructed.

The tunnels have been widened and lengthened to cater to much taller and heavier western tourists, and it’s where most organised tour groups end up.

Around 3,000 people usually visit the tunnels at Ben Dinh every day, although there were less than 700 when we visited in March as the coronavirus pandemic paralysed tourism.

A less touristy section of the Cu Chi Tunnels, which is supposedly a closer reflection of what the tunnels were like during the Vietnam War, can be found at Ben Duoc, another 30 minutes north of Ben Dinh.

Or you might want to visit the Vinh Moc tunnel complex in the De-Militarised Zone (DMZ), about 200 km north of Da Nang. It is a revered site for the Vietnamese and reminds visitors of the price of freedom. 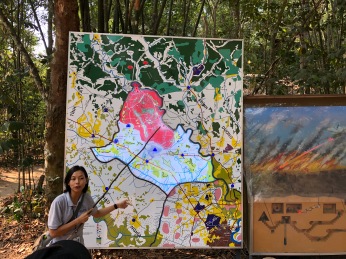 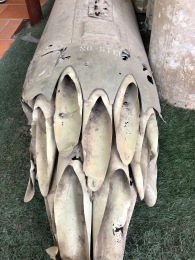 The Cu Chi Tunnels today are a sanitised field of patriotic remembrance, complete with a souvenir shop selling war memorabilia, a rifle range where you can take pot shots, a cafe and a restaurant, where you are served a sit-down lunch at the end.

The tour begins at the visitor shop at the entrance, where a tiny corner is dedicated to a museum displaying an assortment of artillery and weaponry used by the US Army during their campaign, including AK-47 rifles, cluster bombs and MK-82 bombs.

Then you head off down a wooded trail towards the so called Iron Triangle – the 40 square miles of jungle where the intricate tunnel network is found.

Here you’ll be shown a 1967 black-and-white documentary touting the efforts of the guerrilla resistance. They’ve actually started showing the film at the end of the tour in case they put people off.

If you don’t mind a bit of wartime propaganda, you can listen to the audio here. 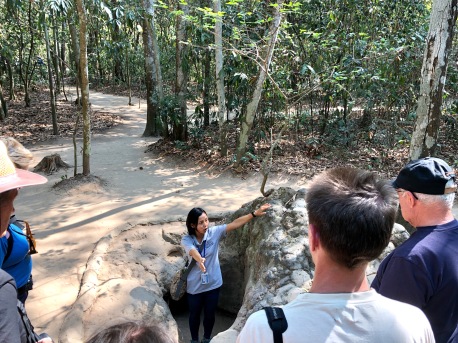 Even if this section of the Cu Chi Tunnels is not totally authentic, it’s still a fascinating insight into what life must have been like for Vietnamese people and the Viet Cong during the war.

The three level tunnel network was cleverly conceived, designed, camouflaged and booby trapped by local Vietnamese, and ventilated with long bamboo poles connecting the passages to the ground above.

They were virtual villages underground. There were kitchens, but meals were cooked only at dawn so the smoke would not be detected as it mingled with the morning mist.

The war rooms had tables and benches constructed inside the cave, while the bunkers had tiny holes to the outside world to provide oxygen.

The highlight of the tour, of course, was crawling through the tunnels.

Although they’ve been widened, heightened and fumigated, as someone who’s 192cm tall, there’s no way I could fit inside most.

I did manage to get down on my hands and knees to squeeze into one tunnel, but I receive an almighty bump on my head on the way out.

Throughout the trails, there are various bunkers, used as viewing points or covert attack positions.

Also on display are sandals made out of old car tyres that soldiers would wear backwards to confuse the enemy who may be tracking their footprints.

In January 1966, around 8,000 US and Australian troops attempted to sweep the Cu Chi district in a large-scale program of attacks dubbed Operation Crimp.

After B-52 bombers dropped a large number of explosives onto the jungle region, the troops searched the area for enemy activity but were largely unsuccessful.

Most Communist forces had disappeared into the network of underground tunnels.

The image above shows where a bomb from a B-52 landed, illustrating why the tunnels were dug so deep.

Over the course of the war, the Viet Cong guerrillas perfected the “art” of the booby trap.

They used trap doors, spikes, trip wires and an array of other deadly hazards to defend their tunnels against enemy soldiers.

The most common were punji stakes, durable bamboo sticks sharpened like arrow heads that were staked, sharp end up. (They were also used by Japanese forces during World War II).

There were a myriad of gruesome techniques used by the Viet Cong, as the clip above shows, including the rolling trap, the see-saw trap, the folding chair trap and the swinging up trap.

While many visitors make their way to the Cu Chi Tunnels by bus, we opted to travel from Ho Chi Minh City by speedboat, and I’d highly recommend it.

The hour-or-so trip up the Saigon River meant we avoided two hours stuck in notorious traffic jams, and it was a much more interesting way to travel. The tour operators also provided breakfast, given it was an early start.

On numerous occasions the boat’s propellers got clogged in the hyacinth, bringing us to a sudden stop. But a quick reverse thrust seemed to clear the blades every time.

> Go early in the day, before it gets too hot. Our morning tour ended around midday and we were dripping with sweat. I pitied those arriving at that time.

> Wear dark coloured clothing as the tunnels are small, musty and often dirty. You’ll be covered in dirt if you decide to venture down.

> Be sure to take insect repellent, a good hat and sunscreen.

Be sure to check the website before booking future travel.

We’ll all be travelling again when the time is right.