Situated on a tiny strip of land shaped like a thumb on the edge of the South China Sea, Vũng Tàu is one of Vietnam’s most popular beachside playgrounds.

Located about 130 kilometres from Ho Chi Minh City, the resort town of Vũng Tàu is where locals and visitors alike go to escape the chaotic, big city hustle and bustle.

Facing the ocean on three sides, Vũng Tàu sits on a peninsula framed by mountains. Throughout the small city, grand colonial architecture is a reminder of its storied past.

Once a popular getaway for US, Australian and New Zealand troops during the Vietnam war, helped along by a notorious “hostess” bar scene, the city is these days far more family-friendly.

Now a major service centre for the oil and gas industry (there are oil rigs just 70 kilometres offshore), you’re just as likely to see riggers on their downtime as you are fishermen, holidaymakers or sun seekers.

The 3 km-long Back Beach, in the shadows of the Christ the King statue, is home to  upscale resorts, hotels and a myriad of restaurants that make it popular with day trippers from Ho Chi Minh City and the resort strip at Ho Tram. 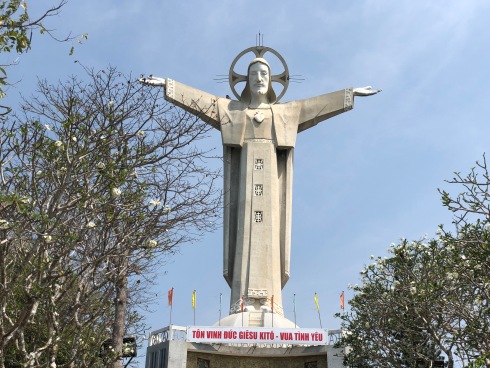 It may not be as famous as Rio’s Christ the Redeemer, but you can’t visit Vũng Tàu without climbing the 811 stairs that lead to the giant Jesus statue, known as Christ the King. That statue stands on Mount Nho (Mount Small) on the tip of the Vung Tau peninsula with its arms out-stretched, overlooking the South China Sea. Admission is free, but the walk is strenuous so you’re best advised to visit early before the heat sets in. 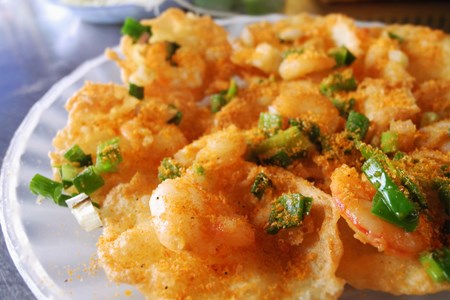 Every part of Vietnam seems to have perfected its own type of street food, and Vũng Tàu is no exception. You don’t have to look far to find the city’s most-popular finger food known as bánh khọt. Bánh khọt are crispy mini pancakes made with rice flour, coconut milk, chopped spring onion and prawn. Roll them up with lettuce and herbs and dunk in fish sauce for a perfect seaside snack. Head to Quán Bánh Khọt Góc Vú Sữa at 14 Nguyen Truong To Street, for one of the best local versions. 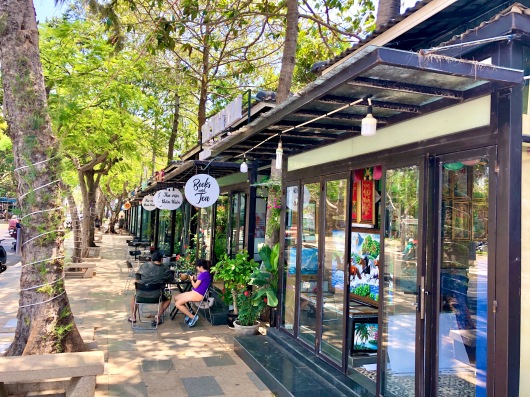 Wander down Ba Cu Street, close to the Front Beach promenade, and you’ll discover a strip of tiny stores dedicated almost entirely to books. There are about 17 capsule-like stores, some also doubling as cafes and tea shops. Known as Book Street, this is the place to come for all your reading needs, including fiction, non-fiction, travel, cooking and poetry books, as well as a huge array of children’s literature. Harry Potter – one of the best-selling foreign books ever in Vietnam – is still huge here, so you’ll find books and other paraphernalia in every second store. The prices can be on the high side, so bargain hard. 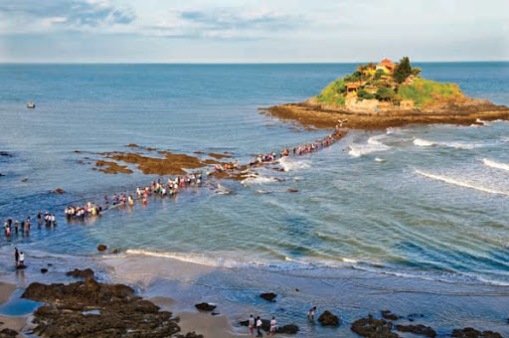 Hon Ba Island (Islet of the Goddess) is located just 200m from Mount Nho and the Giant Jesus statue, and can be reached on foot when the tide is low and a rock causeway is exposed. Alternatively, you could hire a boat at high tide when there’ll be fewer people about. The island is also home to a small Buddhist temple – Hon Ba Temple or Lady Temple – which sits in the shadow of the Christ the King’s left arm. The temple was built by fishermen in honour of the Goddess of the Sea. If you decide to make the trek out by foot, remember to wear shoes to avoid minor injures caused by the rocks and sharp shells. 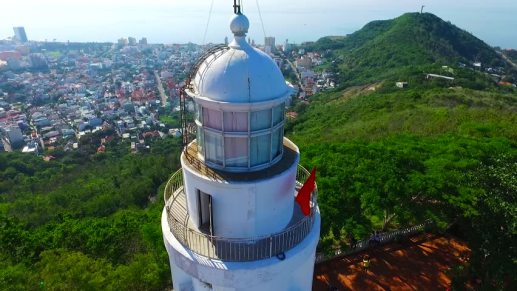 Considered the oldest of 79 lighthouses across Vietnam, the Vũng Tàu Lighthouse was built by the French in 1910. It’s still in operation and provides  sweeping 360 degree views of the town below, as well as the South China Sea. While the Christ the King statue looks within walking distance, you can’t actually walk or drive between the two popular landmarks. It’s 2.8 kilometres from Ha Long Street to the top of Mount Nho, so think about taking a taxi. 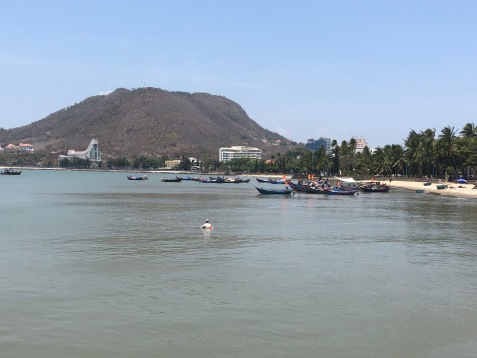 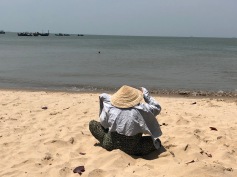 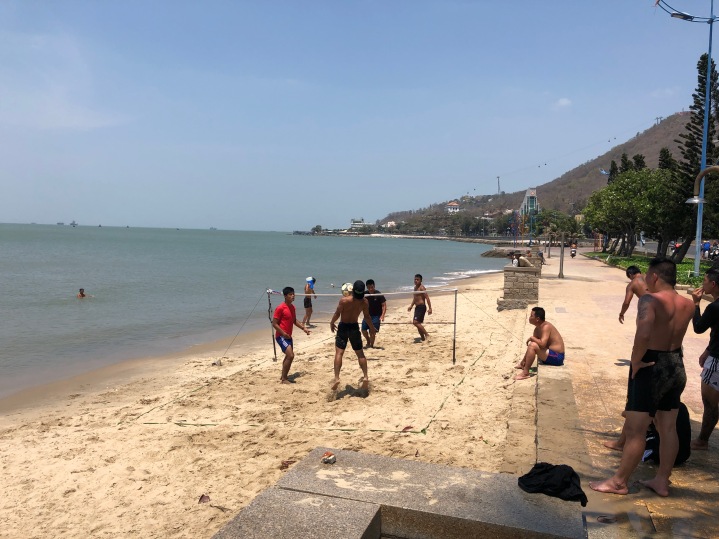 Front Beach (above) – home to a large flotilla of working fishing boats and not far from the hydrofoil terminal – is worth a visit. But be warned, it’s not the cleanest strip of beach if you plan on going for a swim. In years gone by, oil spills and oil residue have also tainted this strip of beach. 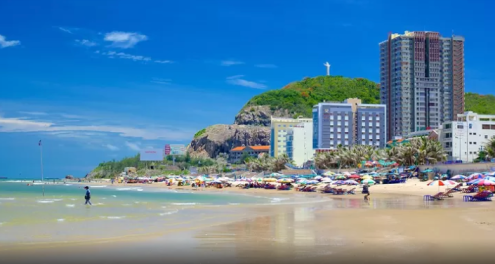 For a better beach experience, head to the six mile long Back Beach (Bãi Sau). It’s actually the most-visited beach in Vũng Tàu and for good reason. The water is clean, the sand is golden and there is actually a swell. 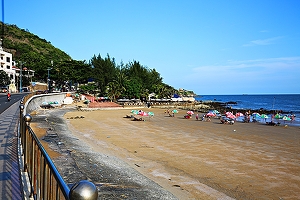 Pineapple Beach (Bai Dua) is located at the foot of Nho Mountain. It’s the smallest of Vũng Tàu’s beaches, but it is also one of the cleanest. Catch the amazing sunset from the  Pineapple Beach Bar and Burger Shack while sipping cocktails. 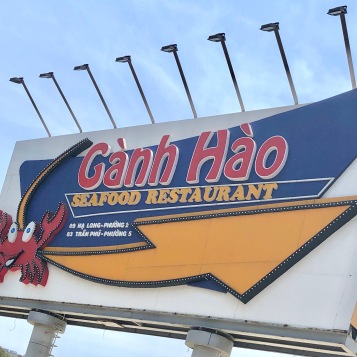 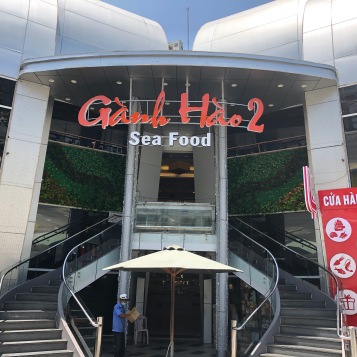 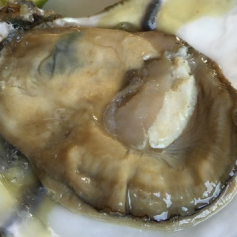 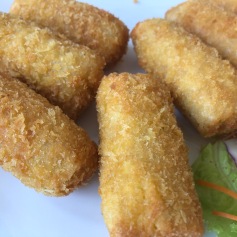 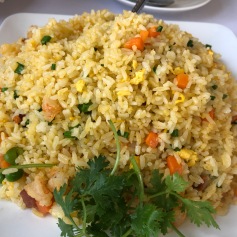 Head to Gành Hào 2 restaurant at 9 Hạ Long, alongside the hydrofoil terminal, for a Vietnamese seafood lunch with a view. It’s an easy walk from Front Beach and Vung Tau’s main town centre, and much closer than the original Gành Hào restaurant at 3 Tran Phu.

They say the Garlic Butter Mantis and Chilli Lobster are the dishes to order here, but sadly we opted against such decadence. Instead we had the fresh oysters (they were monsters), squid, crispy spring rolls and fried rice.

When we visited in mid March, the restaurant was deserted due to coronavirus and the wait staff and managers seemed wary about serving two westerners. We had our temperature taken at the table before ordering, and had to sign a health declaration as well.

It wasn’t the greatest dining experience, but the food was fresh and the beer was cold,  and that’s all that mattered at the time. 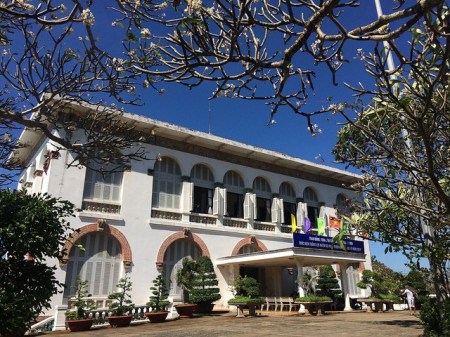 The historic mountainside villa known as White Palace (bach dinh) was once the weekend retreat of Paul Doumer, Governor-General of French Indochina from 1897 to 1902. Its original name was Villa Blanche for Doumer’s daughter Blanche. Built in 1898, the grand colonial-era residence has three floors and is 420 sq.m in size and 19 metres high. It now houses an extensive collection of artefacts recovered from ship wrecks off the Vietnam coast three centuries ago, including ceramics, china, guns and copper coins made during the Qing Dynasty era.

Ride the Cable Car to Ho May Park 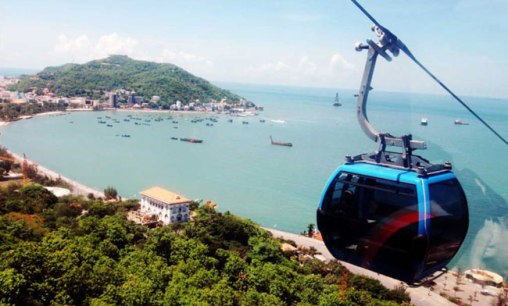 Perched atop Big Mountain (Núi Lớn) is Ho May Eco Tourism Park, an amusement park that time forgot. Amid the temples and Buddhist statues you’ll find pedal boats, horse and buggy rides a fitness course and an array of rides for big kids like the Alpine Coaster, chair swings and go-karts. It’s also home to Vietnam’s first 4D motion dome theatre. Perhaps the best thing about visiting Ho May Park is the cable car ride to the top. You’ll find the entrance to the cable car at Tran Phu Street, next to the ferry wharf.

Head to the Seafood Night Market 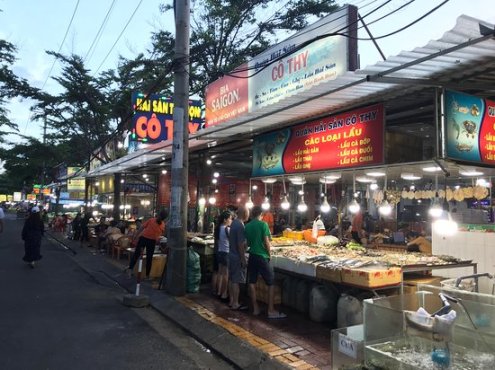 For fresh seafood cooked in front of you, head to the Seafood Night Market in a laneway behind the Imperial Hotel at Back Beach (59 Thy Van Street). This is like typical street food you’ll find in many parts of Asia, with about a dozen open-air stalls grilling prawns, octopus, crabs and other shellfish while you wait. Grab a table, order a frosty cold beer and tuck in. The market really seems to be aimed at tourists and expats, so the prices, although still more than reasonable, are slightly higher than you’ll find at the fish market. The best time to go is mid week, when it’s less crowded.